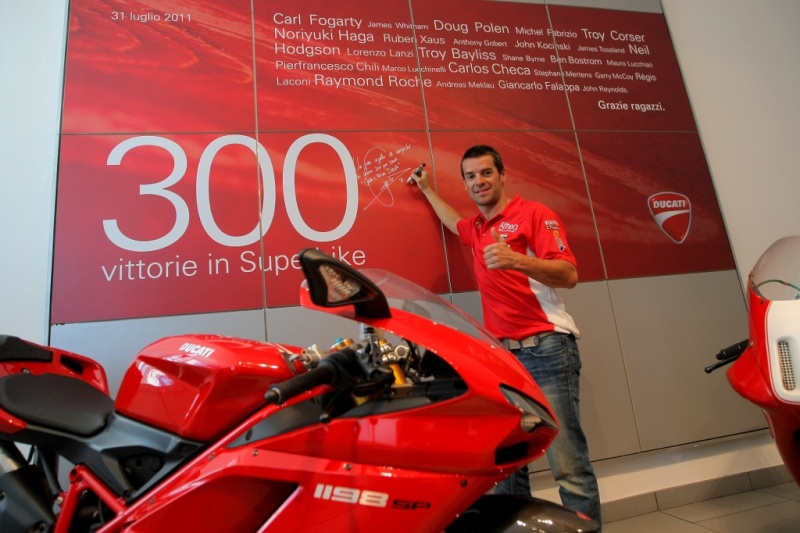 Crescent Suzuki is pleased to announce its agreement with 25-year–old British racer Leon Camier for their assault on the World Superbike Championship in 2012.

Following the announcement that it would be competing on the world stage next season, Crescent Suzuki is extremely pleased to secure the talents of one of the top young stars in World Superbike.

Hailing from Ashford in Kent and currently residing in Andorra, Camier already has a wealth of experience in high-level racing and includes three British Championships – 125cc in 2001, Supersport in 2005 and Superbike in 2009 – amongst his achievements. He will begin testing the Crescent Suzuki GSX-R1000 later this month and is confident for the challenge ahead.

Crescent Suzuki will announce Camier’s team-mate in the very near future, as well as confirming its commercial partners for the forthcoming season in due course. The first round of the 2012 WSB season is scheduled for Sunday 26th February at Phillip Island in Australia.

“I am absolutely thrilled and excited to be joining the Crescent team and with the opportunity to ride the GSX-R1000! My first two years in WSB have been tough but I've learnt a lot and had some good results to build on, so this is a great opportunity for me. I have met with Jack and Paul and it’s clear that the team’s attitude suits me perfectly. I feel we all have the same goals and I can’t wait to start testing. I’m really looking forward to the new season and I believe that the Suzuki GSX-R is certainly a very capable bike, especially with the technical plan the guys have in place. This is a fantastic chance for me to take the next step in my career and I’m very thankful to the guys at Crescent for giving me the opportunity.”

“We are really pleased to get the first signing under our belt! Leon is a rider I’ve always admired and he did a super job when he was in BSB. We’re all looking forward to welcoming him to the team and I’m sure he will fit in well. We work as one team in the garage and this creates a good, strong atmosphere and I am sure that is something that he will benefit from. The Suzuki GSX-R is more than capable of achieving podium results in World Superbike and Leon has already showed that he is capable of producing them as well, so we should be a good partnership. I am sure that the addition of an aggressive, focused rider like Leon to our team, plus the developments planned for the 2012 GSX-R1000, will put us in a good position for the start of Crescent Suzuki’s first year of World Superbike competition.”

Crescent Suzuki is pleased to announce a collaboration with Yoshimura that will see the Japanese tuning company supporting the team as it enters its first year of World Superbike action.

Yoshimura will build, supply and develop the engines for the Crescent Suzuki GSX-R1000 that will participate in the 2012 World Superbike Championship, as well as supplying bespoke race performance exhausts The Yoshimura engineers have already spent some time at the Crescent race headquarters in Verwood and evaluated the development that Chief Engineer Lez Pearson and his team have already made with the 2011 GSX-R engine. The Japanese company will work alongside Crescent to develop the motors further and make them as competitive as possible in time for the start of the 2012 season.

Yoshimura has an enviable record in the world of motorcycle racing and tuning. The company was started in 1954 by Hideo 'Pops' Yoshimura in Japan, followed by the opening of a tuning shop in North Hollywood, America in 1971. The work ethic and dedication installed into the company from day one by Pops still holds strong today and has seen Yoshimura have success in MotoGP, WSB and many national championships as well as in the world of motocross and supercross racing. Pops passed away in 1995, but his legacy will live forever in the history of motorcycle competition and it is that spirit and drive that Crescent Suzuki will now be a part of for its attack on the World Superbike series next year.

Crescent Suzuki SBK - powered by Yoshimura - will begin testing later this month with Leon Camier who was recently named as the first racer to join the team. His team-mate will be announced soon, as will further sponsorship and partner agreements. The 2012 World Superbike championship kicks off at Phillip Island in Australia in February.

“We at Yoshimura greatly appreciate this collaboration and it will be our highest priority. Thanks to Paul and Crescent Suzuki for trusting our engine tuning capabilities and our passion towards competing at the front of the 2012 WSBK Championship Series. We believe Crescent Suzuki has a record of structuring the best racing team in the BSB championship series, with very dedicated technical and supportive team members presenting the most competitive machinery and riders at all races. We hope that the partnership between Yoshimura and Crescent Suzuki will be the most perfectly matched racing team on the WSBK circuits!”

“When Fujio and Yohei came to see me at the Japanese Grand Prix to discuss this partnership, it was clear that their passion and enthusiasm to work with Crescent Suzuki on the global stage was genuine and something they felt strongly about. For us as a team it is a significant level of assistance and a substantial boost to our performance potential. The Yoshimura company was built on engineering the best possible performance from engines and exhaust systems, and that principle has never changed. It is also very pleasing that the whole attitude to the project is of open communication and using the best combination of Yoshimura’s own concepts and ideas and those which already exist in the Crescent developed engine.

“Yoshimura is a global household name in the motorcycle industry and we are very proud that they have shown such trust in the Crescent Suzuki World Superbike team to partner us so closely, and for us to uphold their honour on the world stage.”

“I’m very excited with the 'Powered by Yoshimura' partnership for next year and after spending time with Fujio, Yohei and the Yoshimura team both in Portimao and at the Crescent workshops, I can see they share the same passion and vision as our team. With that in mind it should make for a formidable partnership in SBK 2012.”