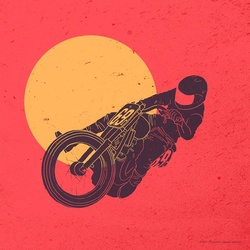 "Ducati, Honda and KTM all use external flywheels on their V4 engines, so they can change flywheel mass and inertia to improve braking stability, grip, turning and traction without breaking their engine seals.

Neither Suzuki or Yamaha use external flywheels because they simply don’t have the room – their engines would be too wide, causing ground-clearance problems.

If Yamaha could have fixed its crankshaft mass/inertia problems with an upgrade after the first few Grands Prix, perhaps this year’s championship would be even better, with Rossi and Viñales in the mix. Because, right now, the punishment for getting your engine spec slightly wrong in the middle of winter is surely too much. You choose the wrong crankshaft mass in late November and you’re still paying for your mistake 11 and a half months later"
_________________
Ça passait c'était beau